In many ways, Aubrey Wilson was born to be a musician. Growing up, Wilson was immersed in jazz, soul, and show tunes without even knowing it; her father, a singer, was part of a successful barbershop quartet, which toured across Canada and the United States. Being around so much music – and accompanying her vocalist father to many of his shows – Wilson developed a natural affinity for performing. In addition to singing, she danced from a young age, performed with her high school jazz band, and, when deciding on her post-secondary education, elected to attend Mohawk College’s Applied Music program, where she studied with Carol McCartney and Bob Shields. It was also at Mohawk that she met the other three members of her band: keyboardist Chris Bruder, bassist Tom Altobelli, and drummer Sean Bruce Parker.

Honeysuckle Rose, the Aubrey Wilson Quartet’s debut album, is the culmination of two years’ worth of arranging, rehearsing, and workshopping, to say nothing of the time that the band has been together, performing consistently for nearly a decade. A true collaborative endeavour, the arrangements for the album were a group effort; though individual band members created the initial arrangements, everyone in the quartet contributed to the process of tweaking and perfecting the songs’ orchestration. Each member of the quartet brings something special to the proceedings. Altobelli and Bruder, with a background in funk and R&B, inject the album with soulful flourishes and harmonic sophistication

. Parker, a studied, technically adept drummer, brings an ear for specificity and tempo, and an adventurous spirit. Show less 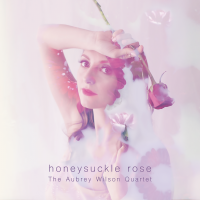 When I Look in Your Eyes

All About Jazz musician pages are maintained by musicians, publicists and trusted members like you. Interested? Tell us why you would like to improve the The Aubrey Wilson Quartet musician page.