The Avengers are ADAM HOLZMAN (Keyboards), LINCOLN GOINES (Bass) KIM PLAINFIELD (Drums), and BELEDO (Guitar). Performers and music educators, they are all jazz-rock-fusion pioneers in their own right, bringing the artistic spirit of electric jazz to a new level for these inspirational times.

ADAM was Miles Davis Band musical director in 1988. KEYBOARD Magazine named him one of the top 10 players in the world, and DOWNBEAT Magazine lauded his “killer groove”. He worked with Michel Petrucciani, Chaka Khan, Robben Ford, Wayne Shorter, Grover Washington and his own band, Brave New World.

KIM is an Associate Professor at Berklee School of Music and Co-Chairman of the faculty at the Drummers Collective in New York City. His book, entitled “Advanced Concepts,” is known as the “bible” of modern progressive drumming. He played with the Pointer Sisters, recorded “Double Up” and “Assembler” with Bill Connors, and “Live At The Olympia” with violinist Didier Lockwood. Kim and Lincoln’s CD “Night and Day” features Jon Lucien, Mino Cinelo, Bill O’Connell, Alex Foster, Didier Lockwood, Myra Casales, Dan Carillo, Bill Connors, Adam Holzman and Pat Thrall.

BELEDO is legendary among Uruguayan music connoisseurs. A guitar hero in his teenage years, he was featured in GUITAR PLAYER magazine and JAZZIZ magazine while playing in South America with Pedro Aznar, Ruben Rada and the band, Opa. His CD, MONTEVIDEO JAZZ DREAMS, featured Stefon Harris, Randy Brecker, and Manolo Badrena. Beledo has also performed and recorded with Gary Willis, Anton Fig, Bakithi Kumalo, and many others. 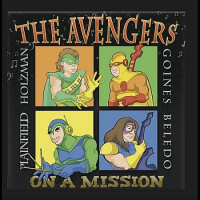 Help improve the The Avengers page

All About Jazz musician pages are maintained by musicians, publicists and trusted members like you. Interested? Tell us why you would like to improve the The Avengers musician page.