The Groovemasters are four powerhouse musicians who have combined their diverse talents into an instrumental sensation that has generated immediate buzz. Deeply steeped in the jazz tradition, their music combines jazz, funk, R&B, Latin and more, and their wide-reaching appeal is grounded in one thing: Groove. It's the heartbeat - the soul - of every song, driving the enticing melodies and heavy improvisation that has everyone from jazz festival music lovers to club patrons wanting more.

Quickly realizing that they had a unique magic together, The Groovemasters has since shifted their focus toward playing and writing as a group, and the response has been overwhelming! The energy and joy they project is simply infectious, producing a fan base right from the beginning. Having carved their own path, the four are excited to announce their studio debut EP release in May 2009. With one listen, The Groovemasters will leave you wanting more.

Their cohesion is remarkable, their sound exciting and, their groove - unparalleled. Show less 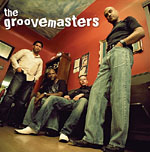 Help improve the The Groovemasters page

All About Jazz musician pages are maintained by musicians, publicists and trusted members like you. Interested? Tell us why you would like to improve the The Groovemasters musician page.