Home » Musicians » Discography » There'll Be Some Changes Made

There'll Be Some Changes Made 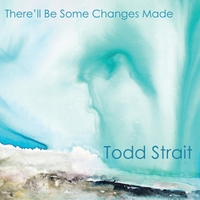 There’ll Be Some Changes Made; Fur Elise; Kids Are Pretty People; It’s Just Talk; In Her Family; Tiptoe; Infant Eyes; Lullaby For Omi; Old Folks; Once Upon A Dream; What A Wonderful World.

After recording more than 100 albums for other people, including three that were Grammy-nominated, drummer {{Todd Strait}} has finally released his first CD as a leader. With so many dedications to his relatives, it’s clear this record has been simmering for a long time. Well, it’s finally cooked, and served—and it’s delicious. Strait has assembled an exceptional quartet, with {{Bill Mays}} on piano, who arranged all but the last track; the well-seasoned bass player {{Bob Bowman}}; and the fluid and creative guitarist {{Danny Embrey}}. Strait has selected fine material that is not commonly played, such as two tunes by {{Thad Jones}}, two by fellow Kansan {{Pat Metheny}}, a {{Wayne Shorter}}, and even a Beethoven. There is one original, the lovely “Lullaby for Omi” (his daughter), Strait does a great, soulful job singing “Old Folks” in honor of his father; his children sing here too, on the last two tracks. Their voices were recorded long ago, then folded into the current music with a technological tweak or two. Nicely mixed by {{Eldar Djangirov}}, this record is well worth the wait. Things hit the ground running with the title track, which changes tempos but never stops swinging until its final, surprisingly unadorned piano note. And speaking of surprises, the second tune is Fur Elise, the bane of every beginning pianist, even if it was written by Beethoven. After an initial salute to the original, the quartet turns it upside down and inside out, taking it for a satisfying spin before returning home. This is one of those rare CDs where every track is so enjoyable, and each solo so notable, that it really makes no sense to itemize each one. But highlights include the rocking consistency of the groove, Mays’s exquisite, unaccompanied take on Metheny’s “In Her Family,” and the audible delight of expert musicians who are listening closely to each other. (Please note that, due to a design error, the track sequence in the liner notes and back cover do not match up. The numbered ones are correct. Also, for Fur Elise, where is the umlaut on this keyboard??)

Recording Self-Produced There'll Be Some Changes Made Todd Strait

Help improve the There'll Be Some Changes Made page

All About Jazz musician pages are maintained by musicians, publicists and trusted members like you. Interested? Tell us why you would like to improve the There'll Be Some Changes Made musician page.