Thomas Alm . Saxophones, compositions and arrangements . Thomas received his musical education at Berklee College of Music, and combines freelance jobs as a musician with work at an advertising agency. He has appeared on countless recordings and has performed with artists such as Sharon Dyall, LaGaylia Frasier, Svante Thuresson, Janne Åström, Jennifer Brown and others. He leads the soul band Soul Station, which among other things has made several acclaimed gigs at Stockholm jazz club Fasching and also plays in the band P- Floyd. A band that achieved great success with its spectacular shows. In august 2016, Thomas Alm Quartet & Friends released the album “A Conversation In Blue” 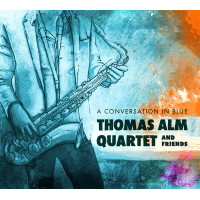 A Conversation In Blue

All About Jazz musician pages are maintained by musicians, publicists and trusted members like you. Interested? Tell us why you would like to improve the Thomas Alm musician page.