Thomas Pol (26) is a Rotterdam-based bass player who is well known in the Dutch and international scene. His spontaneous, strong and grooving style is what defines him as a player. As a sideman he is the strong foundation an ensemble needs and as a leader he shows great potential with his debut album on it’s way.

Thomas was raised in a very musical family. At age four, he started playing violin and at age ten he started playing the upright bass. He began his studies at the Codarts Conservatory in Rotterdam, the Netherlands, where his talent and dedication were well received. In his 3rd, year he was approached by Hein van de Geyn (bassist/jazz coordinator/teacher) to follow an exchange program in New Orleans, home of jazz. During his time at Codarts and UNO, he shared the stage with an impressive amount of well-known musicians such as Ellis Marsalis, Benjamin Herman, Herlin Riley, John Engels, Stanton Moore, Ack van Rooyen, Randy Brecker, Steve Masakowski, Caro Emerald, Wess “Warmdaddy” Anderson, Harmen Fraanje, Gregory Porter, Johnny Vidacovich, Peter Beets, Jamison Ross, Wouter Hamel, Nicholas Payton, Peter Bernstein and countless others.

In 2013 he was awarded a Fulbright, Prins Bernhard Cultuurfonds, Van den Ende and UNO distinguished musical scholarship to follow the masters program at UNO for 2 years. During that time he studied classical music, arranged for orchestra, worked his way deeper in the scene, started his career as a bandleader and recorded his first album which will be released in the spring.Thomas is currently back home in the Netherlands working on his own project, debut CD and teaching workshops about New Orleans. 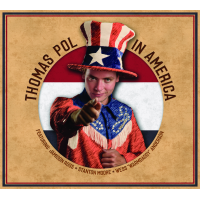 All About Jazz musician pages are maintained by musicians, publicists and trusted members like you. Interested? Tell us why you would like to improve the Thomas Pol musician page.