Tia Imani Hanna is a musician who takes listeners from one deep, swelling moment to the next, rarely pausing between chords without inhaling a fresh breath of passion into the river of her work. Ms. Hanna says her mission is “to create music that makes the listener remember they are spiritual beings, that spirit moves within us through sound, through vision, through dance…with joy and love.”

Nurtured By a Family of Musicians

Born in Detroit, she was nurtured by a family of musicians, including her aunt, Naima Shamborguer, the popular Detroit jazz vocalist, and world-renowned jazz pianist, the late Sir Roland Hanna, who inspired her to pursue this indigenous American art form.

Ms. Hanna began performing in Detroit area festivals, benefits and concerts. After college she also hosted a popular weekly radio show called Take the A Train. The artist moved to New York City in 1998. Since being in New York City, Ms. Hanna has performed in various clubs as a violinist with a number of different groups. She has performed with notable musicians, Paul West, Eddie Locke, Richard Wyands, Alisdair MacRae-Birch, Mark Johnson, Earl McIntyre, Naima Shambourguer, Marion Hayden, Gaylin McKinney, Renee Manning, Jerome Harris, Ron Jackson, Miles Griffith, and Pam Wise. Hanna was thefeatured violinist for the Fourth American Jazz String Summit. This event was presented at the New School Jazz department, where Hanna premiered her composition “Brazil the First Time.” Hanna was the musical force behind the independent film, Inside, an original dance and music project composed by Ms. Hanna with video-choreographer, Andrea E. Woods. It has become a permanent part of the Jerome Robbins Dance collection at the New York City Public Library. She has recently toured with The Souloworks Dance Company and worked with Gesel Mason in the Washington D.C. area. Ms. Hanna's debut CD, The Book of Tia: Chapter One is available on her website. www.tiaimanihanna.com. and www.cdbaby.com/tiaimanihanna

In 2005, Ms. Hanna produced a two hour concert of all of her published material presented at the Brooklyn Conservatory of music entitled “Everything I Hear” funded by a Brooklyn Arts Council grant. She is currently working on her 2nd CD.

About her current direction,

the musician says, I am learning to sing through my instrument, ...to let my soul flow through it. Ms. Hanna is has an incredible ability to weave atmospheres with storytelling melodies and harmonies oozing rich textures of soul and raw emotion.

Tia Imani Hanna returned to live and work in Michigan in 2009. She opened her own music school, Green Bow Music, and performs regionally and nationally with her groups, The Tia Imani Hanna Project (world synthesis music), and Hanna Jazz Quartet (HJQ).

Tia Imani Hanna was a top ten winner in the world music category on the fan select site, OurStage.com in February 2008, for her song, “Fiona's Cousin,” from her debut album, The Book of Tia: Chapter One.

Everyday Music Workshop Instructor: Tia Imani Hanna: Jazz Violinist, Vocalist, Composer, Clinician About this workshop: Learn how to hear your internal muse and express that voice. Play musical improvisational games. Share healing energy with other group members. Generate musical compositions expressing peace and unity. Play with sound. This workshop uses a series of musical games and exercises to create a functional format and safe environment for everyday musicians, (all of us)

Everyday Music Workshop Instructor: Tia Imani Hanna: Jazz Violinist, Vocalist, Composer, Clinician About this workshop: Learn how to hear your internal muse and express that voice. Play musical improvisational games. Share healing energy with other group members. Generate musical compositions expressing peace and unity. Play with sound. This workshop uses a series of musical games and exercises to create a functional format and safe environment for everyday musicians, (all of us). Let’s challenge ourselves to hear our internal voices. This workshop is for anyone who loves music. There is some basic, gentle movement and participants should wear loose and comfortable clothing. Lots of fun, laughter and great music will ensue. This workshop is available for ages 10 years to 100+ years! 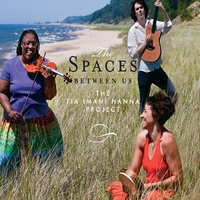 The Spaces Between Us

All About Jazz musician pages are maintained by musicians, publicists and trusted members like you. Interested? Tell us why you would like to improve the Tia Imani Hanna musician page.