Berklee Associate Professor Toru “Tiger” Okoshi has observed dualities in his life over the years. With a grin, he tells me about how he was recently booked for two performances on the same night at the same hour in two different places. Remarkably enough, he showed up on time for both gigs. The fact that the two venues were on opposite sides of the international dateline helped the logistics considerably.

Tiger is a nickname given him by pianist Ted Lo '75, one of the first friends he met when he arrived at Berklee. Tiger is the part of Okoshi's personality that is the renowned jazz trumpeter who got his start in the U.S. Toru is his alter ego, who was born in Ashiya City, Japan, the son of a samurai warrior. It was Toru who earned a degree in commerce from Kwansei Gakuin University in Japan before coming to America on his honeymoon.

That trip to America in 1972 was a turning point and led to the emergence of Tiger. Okoshi and his new bride Akemi traversed the country on a Greyhound Bus and ended up in the lobby of Berklee's 1140 Boylston Street building. With no English language skills and very little money left, Okoshi and his wife relied on the hospitality of various Japanese students (including Ted Lo) for accommodations until they found their own apartment. Okoshi decided to cash in the airline tickets for the couple's return to Japan, paid his tuition, and began his studies at Berklee.

Soon, Okoshi was playing with some of the top instrumentalists at the college. “We thought we were going to be the next generation of jazz musicians to leave our mark,” said Okoshi. “I became friends with guitarist Bill Frisell ['78], who helped me put my band, Tiger's Baku, together with drummer Tommy Campbell ['79], keyboardist Frank Wilkins ['78], and bassist Kermit Driscoll ['73]. We used to call the band Baku School because many people who played in the band went on to great gigs afterwards.” Indeed, many former Baku sidemen like Mike Stern '75, Vinnie Colaiuta '75, Kai Eckhardt '87, Gerry Etkins '76, and others have gone on to work with major artists and develop solo careers.

After graduating from the college in 1975, Okoshi became a sideman himself. In 1978, he got a chance to tour with Gary Burton's band. “I had made up my mind that I was only going to play jazz,” Okoshi recalls. “My wife said, 'Have you seen how much money we have in the bank?' I told her to just hold on and things would work. Then, Gary called. It seems that every time I have made up my mind to do something, it works out. If you want to steal second base, you have to leave first base.”

Okoshi's first gig with Burton was at Carnegie Hall opening for the Bill Evans Trio. “That was scary!” Okoshi said. “I can't believe how things started. I worked with him for over two years. Gary was the first one to take me back to Japan, and I was exposed to Japanese audiences there for the first time.”

Since that introduction, Okoshi has cultivated his own career and become well-known throughout the Pacific Rim. He now plays there at least five times each year. During one fateful trip in January 1995, he was visiting his family in Kobe when a devastating earthquake struck, killing 6,000. No one in his family died, but they experienced great loss of property. Okoshi helped rescuers pull victims from the rubble, some alive and some dead. He also helped his family salvage what they could from the wreckage. The last thing he pulled out was his trumpet.

Surviving the tragedy made him reexamine his life. “I thought of how I had focused on nothing but music--the distance between notes and the relationship between notes, harmony, and rhythm,” he said. “I hadn't paid enough attention to relationships between humans and the distance between happiness and sadness. Was joy supposed to be when I played a good solo? It was as if someone wanted me to be in Kobe at that time to learn this.”

He helped for 10 days, but then he had to get back to his family in America. “I felt guilty thinking about my home in Boston and how I could go back there and it would almost be like nothing had ever happened,” he said. “On the flight back to America, I wondered which place was my real home and what I was supposed to do.”

Once in Boston, he canceled an upcoming Canadian tour. “I couldn't go in front of people and play,” he said. “Every time I tried to play, my jaw would tremble and tears would well up. I felt jazz was too personal a music for me to play then.” He recalls listening and playing along with Rachmaninoff's “Vocalise” op. 34, no. 14 for weeks, feeling nurtured by that piece. He says that he began to see humanity like a huge river universally moving in one direction. In his mind, he could see the hands of people reaching for help from the wreckage. He made a resolve to try to reach out whenever he could to help those who were struggling.

He brought this philosophy to his teaching and has begun devoting time to teaching music to autistic children at the Boston Higashi School. “Jazz improvisation was unheard of for autistic children before,” he said, “but we are succeeding. I tell students at Berklee and elsewhere that there are more possibilities than impossibilities. I tell them not to get caught up thinking I wish I could or I wish I had. You have to think of what you already have and hold onto it. If everyone had the same thing, it would be no fun. It is a long process to become the musician that you want to be. I haven't gotten there yet; it's a long journey.” Show less 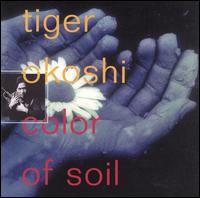 The Color Of Soil


Echoes Of A Note

All About Jazz musician pages are maintained by musicians, publicists and trusted members like you. Interested? Tell us why you would like to improve the Tiger Okoshi musician page.