Tim Gerwing was born in Canada, but experienced his childhood in Germany. Early lessons in classical piano gave way to experimentation with jazz, electronic, new age, progressive rock/pop, and Middle and Far Eastern musics. The purchase of his first synthesizer and electric guitar in the late 80's were turning points and very much shaped what was to become his signature sound.

Tim Gerwing performs on keyboards, guitars, electronics, and Middle Eastern percussion both solo and with world musicians including Boris Sichon (www.sichon.com), Tarun (Beats Without Borders), and Serwan Yamolky (www.serwanyamolky.com) in Vancouver, Canada. He has been a guest musician with Gord Grdina’s Haram (www.gordongrdina.com), with artists on the Canadian Copperspine Records (www.copperspine.com) label, and is co-founder of the 30 Days Project (www.thirtydaysproject.com). 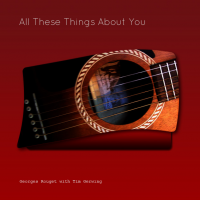 All These Things About You

All About Jazz musician pages are maintained by musicians, publicists and trusted members like you. Interested? Tell us why you would like to improve the Tim Gerwing musician page.