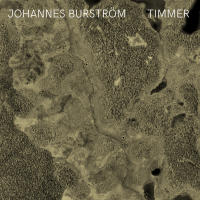 Timmer, a solo album by Johannes Burström, presents seven double bass improvisations which has been extended into the listening moment, through a mosaic of algorithms and intuition. Phrases, onsets, and interstices has been collected, cut up, shuffled by design and by chance, dressed in new timbres and regenerated in 65536 unique versions. In ”348” the double bass is engaging in a duet with a virtual percussionist, who follows the radical tempo shifts of the bass in an uncanny manner. ”Cheek to Cheek” embraces indecisiveness and amplifies the arbitrary, while Burström's signature feedback-based infinite sustain of ”Gray on Gray” almost pierces the speaker membranes when joining forces with some truly gnarly metallic preparations. ”Room Modes” is a serene meditation on harmonics and transients, which flows in and out of reality by means of subtle time shifts and repetitions. Timmer is a study in possible connections between generative processes and improvisation, realized as a chance- operated playback machine written in SuperCollider - a platform for audio synthesis and algorithmic composition. The scores build upon the motifs and structures of the original improvisations, by highlighting and distorting timbres and temporality. The bass is prepared with objects and custom feedback-based electronics, which creates a hybrid instrument, effectively blurring the line between the acoustic and the digital.

All About Jazz musician pages are maintained by musicians, publicists and trusted members like you. Interested? Tell us why you would like to improve the Timmer musician page.