Tim Richards was born in London and was drawn to music at an early age, his first encounter with a piano being at the age of 8 in a dentist’s waiting room. He studied classical piano with the renowned Carola Grindea until the age of 14, when he began attempting to teach himself jazz and blues after seeing Thelonious Monk on TV.

Tim’s seminal modern jazz group SPIRIT LEVEL was formed in Bristol in 1979, a quintet with saxophonist Paul Dunmall and trumpeter Dave Holdsworth, and released seven albums between 1979 and 1999. After appearing at the 1985 Vienne jazz festival on the same bill as Miles Davis, they teamed up with US trumpeter Jack Walrath (ex-Mingus) for a series of UK and European dates, recording the acclaimed 'Killer Bunnies' album (Spotlite). In 1989 Jerry Underwood replaced Paul Dunmall and the band continued touring throughout the 90s, performing at jazz clubs and festivals in almost every European country, with appearances in double bills opposite such names as McCoy Tyner, Horace Silver, Joe Zawinul and Joe Henderson. They were nominated 'Best Small Group' in the 1995 British Jazz Awards.

In 1999 Tim expanded the group to a nine-piece, renaming it GREAT SPIRIT and recruiting some of Britain's most dynamic jazz musicians, including Tony Kofi, Gilad Atzmon, Denys Baptiste, Dick Pearce and Roger Beajolais, who all appear on the bands first CD 'Suite for The Shed', released on the 33 Records label back to back with a Best of Spirit Level compilation (33Jazz051). The Suite is a 60-minute piece in seven sections, commissioned in 1999 by Yorkshire venue The Shed, premiered on the band's first UK tour and broadcast on BBC Radio 3 the same year.

GREAT SPIRIT went on to tour the UK several times, most recently in 2006 with a grant from the PRS Foundation, taking in appearances at the Brecon, Cork, Manchester, London and Scarborough jazz festivals (amongst others) and featuring a cross-section of Britain’s most talented musicians including Peter King, Jason Yarde, Ed Jones, Chris Biscoe and Seb Rochford. Their second CD 'Epistrophy' (33Jazz120) received exceptional reviews (see below).

Tim's work also includes compositions for non-jazz ensembles, beginning with 'Timetrap', a commission for piano. violin and cello first performed Tryptich Piano Trio in 1998. More recently he studied at Trinity College of Music with Stephen Montague and Deirdre Gribbin, receiving his MMus in Composition in 2008 and writing 'Tangletalk' for Consortium5 Recorder Consort (2007) and 'Escape Velocity' for the Interference Trio (2009). His most recent jazz commission is the 25-minute 'Shamanism Suite' for the Gloucester Youth Jazz Orchestra, which he conducted at the 2009 Cheltenham International Jazz Festival. In 2011 he was commissioned by pianist Kate Ryder to compose 'Syzygy' for her collection of vintage toy pianos and looper pedal, which was first performed at the Royal Festival Hall, London, in May 2011.

The Tim Richards TRIO has also been a continuing presence on the UK jazz scene, releasing three albums for 33 Records and entertaining audiences as far afield as Istanbul and Inverness with their combination of contemporary originals, swinging bebop and bluesy grooves. The trio last toured the UK in February/March 2011 to promote their third CD 'Shapeshifting' (33Jazz205), with Van Morrison drummer Jeff Lardner and bassist Dominic Howles.

Other CD recordings include two joint releases in 1997 and 1999 with Austrian saxman Sigi Finkel, with whom he toured extensively in Central Europe and appeared at several major jazz festivals including Bath, Cheltenham and Rabat (Morocco). Tim has also toured and recorded with many well-known blues artists, including the award- winning Otis Grand, Dana Gillespie and Earl Green, US guitarists Larry Garner and Joe Louis Walker, Chicago vocalist Deitra Farr, and Muddy Waters’ harmonica player Mojo Buford.

Apart from his playing activities, Tim is one of Britain’s best- known jazz educators and author of several books including IMPROVISING BLUES PIANO (1997) and EXPLORING JAZZ PIANO (Vols 1 & 2, 2005), published by Schott Music. These have been widely credited with setting a new standard in music education, the latter winning a prestigious Music Industry Association (MIA) award in 2006. His latest book EXPLORING LATIN PIANO (2010) is a collaboration with pianist John Crawford.

As well as giving workshops all over the UK and abroad, Tim is a jazz examiner and contributor to the ABRSM jazz piano syllabus, a member of the jury for the Nottingham International Jazz Piano Competition and a frequent broadcaster on BBC Radio, with recent appearances on Radio 3 Jazz Library programmes devoted to pianists Wynton Kelly and Hampton Hawes. He currently teaches jazz piano classes at Morley College and The City Lit, London. Show less

“Richards' arrangements are terrific, and the choice of material is just as good... A landmark achievement in a long career.”
John Fordham - THE GUARDIAN

“Everyone who reads this magazine should buy this album it's British jazz at its best.” 4 stars (an outstanding release).
Stuart Nicholson - JAZZWISE

“Tim Richards... moves with impressive confidence from boiling Latin rhythms to bebop, ballads and even a tinge of gospel, while still retaining his own recognisable style.”
Dave Gelly - THE OBSERVER

“A unique mixture formed from his admiration of both the expansive, robust playing of McCoy Tyner and the luminous delicacy of Abdullah Ibrahim.”
The TIMES

“Something of a master class in contemporary jazz piano from a vigorous, vibrant but tastefully interactive band.”
Chris Parker VORTEX JAZZ

“Richards' arrangements are terrific, and the choice of material is just as good... A landmark achievement in a long career.”
John Fordham - THE GUARDIAN

“Everyone who reads this magazine should buy this album it's British jazz at its best.” 4 stars (an outstanding release).
Stuart Nicholson - JAZZWISE

“Tim Richards... moves with impressive confidence from boiling Latin rhythms to bebop, ballads and even a tinge of gospel, while still retaining his own recognisable style.”
Dave Gelly - THE OBSERVER

“A unique mixture formed from his admiration of both the expansive, robust playing of McCoy Tyner and the luminous delicacy of Abdullah Ibrahim.”
The TIMES

“Something of a master class in contemporary jazz piano from a vigorous, vibrant but tastefully interactive band.”
Chris Parker VORTEX JAZZ

“The Tim Richards Trio left us in no doubt that the blues is not only the soul but the testosterone in the central thrust of jazz ancient to modern.”
JAZZ REVIEW

“A lot more drive than you see in most young pianists today... drama and elegance... pure melodic beauty... The kind of naturally swinging pianist you can never hear too much of.”
CADENCE Magazine (USA)

“Luminously funky, laced with the blues”
THE ROUGH GUIDE TO JAZZ

“Passion, groove and grit.”
TIME OUT

“A highly distinctive solo voice, blues and gospel tinged, but with a percussive drive betraying his roots in hard bop.”
The INDEPENDENT 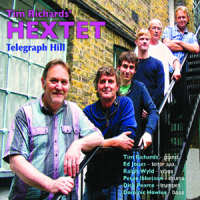 All About Jazz musician pages are maintained by musicians, publicists and trusted members like you. Interested? Tell us why you would like to improve the Tim Richards musician page.