Rafael Angel ‘Tito’ De Gracia was born on April 4, 1962 in Villa Palmeras, Santurce, Puerto Rico. He began playing the tumbadoras (congas) at 5 years of age and at 12 he was seriously playing the bongos and the timbales. He also studied the trumpet from 14 to 16 years old. Still in his adolescence, he joined the band Los Chiquitines del Son as a percussionist, directed by renowned guitarist Max Torres.

From 1978 to 1980, he played the timbales with the salsa band Maldades, lead by pianist Archie Pereira. Later, from 1980 to 1982, he played congas with saxophonist Hector Lopez and his orchestra in San Juan, recreating the music of Machito, Tito Puente and Tito Rodriguez. In ’82 he joined up with La Panamericana orchestra, under the direction of trumpeter Carlos ‘Coamito’ Rodriguez.

In 1984, due to his consistent and brilliant performances, De Gracia, was signed with the company Latin Percussion as spokesman. The company has honored him with his own set of signature timbales. From 1985 to 1990, he joined bongo player Roberto Roena’s Apollo Sound orchestra playing the timbales. After which he became timbalero with renowned salsa singer Andy Montañez.

He began as group leader in 1996 with his band 7 Knights, more recently, since 2003, directing his Naoka Jam, with whom he recorded his debut album ‘My Latin Roots.” (ONC Records).

His latest effort “Atmosphere” also on ONC, was released in 2007. Show less 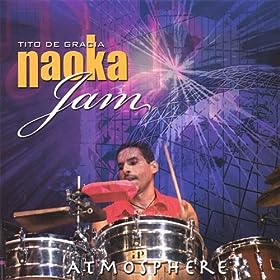 All About Jazz musician pages are maintained by musicians, publicists and trusted members like you. Interested? Tell us why you would like to improve the Tito de Gracia musician page.