Tobias Christl, DOB 1978, is a rarity, a singer the likes of which there never was before in German jazz. Neither a crooner nor a scatter, and least of all a pop musician disguised as a jazzer. Much more a storyteller, somewhere between indie and improvisation. A Berliner by choice, Christl is a vocal artist, a songwriter, improviser, speaker, composer, DJ and co-founder of the Cologne KLAENG collective. He plays piano and keyboards, clarinet and guitar, and studied, among others, under Theo Bleckmann in New York.

“Wildern” (poaching) is the title of his ACT Young German Jazz debut. Why? “What we like to hunt most are good songs”, he says. “Wildern” is a foray through the dense underbrush of four decades of pop music, through songs from greats like Leonard Cohen, The Smiths, Björk, A-HA, Joy Division, Lana del Ray.“ 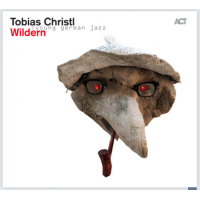 All About Jazz musician pages are maintained by musicians, publicists and trusted members like you. Interested? Tell us why you would like to improve the Tobias Christl musician page.