Three CD's were added to his discography with the release of the Casablanca Records “Jazz Baby” Series, which includes four performances with long-time writing partner, Cybill Shepherd. Tom's piano work was frequently heard on the highly acclaimed CBS sitcom, “Cybill”.

As a writer, he has contributed to recordings such as Ernestine Anderson's Grammy- Nominated release, “Now and Then”. Other industry credits include the Universal film “Happy Gilmore” and collaborations with famed animation house, Klasky-Csupo, yielding the original Echo Award winning Free Credit Report ad campaign and the Mentos “Marching Mint” spots seen on ESPN2.

As a vocalist, he has been heard on The Osbournes, MTV's Newlyweds, and has performed many times on “The Tonight Show” including a turn as the singing voice of Jay Leno.

Tom is a member of the Af of M, AFTRA, ASCAP, IAJE, and NARAS. 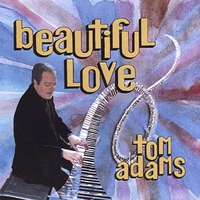 All About Jazz musician pages are maintained by musicians, publicists and trusted members like you. Interested? Tell us why you would like to improve the Tom Adams musician page.