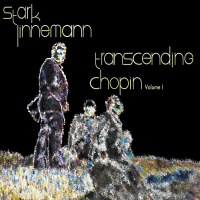 Transcending Chopin Volume I is the second album by co-bandleaders StarkLinnemann. It grew out of Paul Stark’s uncompromised love for the music of the Polish Romantic composer and piano virtuoso Frédéric Chopin and Jonas Linnemann’s passion for contrasting ethnic rhythms. StarkLinnemann treats the material of each piece in a very original way. On this album they are exploring the tension between improvisations inside long arranged forms within the trio format. This leads to interesting textures like the use of fixed polyrhythmic grooves, in contrast to free floating organic rhythms on top of fixed elements. Though you’re listening to modern jazz, the essence of Chopin’s music is always being respected. Not just fragments are adapted, but the pieces are recomposed as a whole. For the live performances StarkLinnemann added another art form to complement the overall experience. Scriptwriter Jacquelien Wielaard has created an exciting monologue indirectly linked to Chopin by his relationship with French writer and first feminist George Sand. Inspired by Sand and Gustave Flaubert’s long and extensive correspondence Wielaard put together a well-balanced amalgamation of text on which the monologue is based. During live performances StarkLinnemann is synthesizing the separate Arts into a unified whole by including the perceptual involvement of the audiences heart and mind.

All About Jazz musician pages are maintained by musicians, publicists and trusted members like you. Interested? Tell us why you would like to improve the Transcending Chopin Volume 1 musician page.