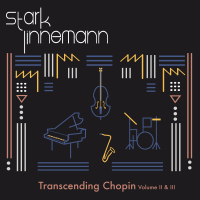 TRANSCENDING CHOPIN Volume II & III On this double album you can listen to modern jazz renditions of two masterpieces by Frédéric Chopin. StarkLinnemann has made a thorough study of these ‘late Chopin Sonatas’ before scheduling a recording date. The Cello Sonata opus 65 was recomposed in the winter of 2013 and has had the time to mature for some years. The main recomposing of the ‘new’ Piano Sonata opus 58 was done in a four-month period during the summer of 2015. Inspired by Jonas’ knowledge of odd meters and rhythmic modulations I recomposed the Piano Sonata in such a way that we could surpass ourselves as a band. Especially the first and fourth movements are rhythmically so challenging that we had to make the utmost effort to reach a completely natural performance. Personally, I really like Jonas’ African poly-rhythmic introduction to the second movement. First he makes a quotation of the second part’s main theme, as often heard in West-African talking drums. At the end of the introduction it is as if the ‘drum group’ disappears in the distance before coming back: a nice 21st Century echo of Chopin’s Marche funèbre. Also noticeable is the great sound of the arco solo of Vasilis in the first part! You can really hear sadness and deep grief, which contributes to an undeniably modern Chopin sound. The main challenge of recomposing the Cello Sonata was to find reliable concepts to transform the many parts containing rich counterpoint whilst maintaining a nice groove. Transforming the first and particularly the fourth movement was a difficult task in this respect. Also many difficult choices had to be made concerning the division of the cello part between the arco bass and tenor saxophone part, without compromising the powerful modern jazz sound. Although Iman joined the band just two months prior to the recording session we cannot thank him enough for his open-mindedness and contributions to this project. We had a lot of discussions about the ‘counterpoint problem’ especially in conjunction to the right dynamics and eventually managed to find satisfactory solutions. How much more ‘from the heart’ can a musician play than in Iman’s John Coltrane inspired solo in the first movement! It gives us a hint of Chopin’s rare but extreme outbursts of anger and despair, probably due to his exile. Listening to the recordings now we feel an enormous fulfillment. In the ‘new’ Sonata opus 58 you can still hear the mixture of contradictory emotions Chopin must have felt during the period of the sonata’s creation. Hearing about his father’s death on May 3 1844 and yet at the same time spending an extremely happy summer with his oldest sister Ludwika, who had traveled from Warsaw to Paris and Nohant to meet her brother again, after twelve years must have had a tremendous influence on the piece. In the second part you can still imagine ‘the flight of a bird in the morning sky […] a flutter of beating wings’ (Alfred Cortot), or experience the quietness of the Berry’s countryside in part 3. Also our new version of the Cello Sonata, Chopin’s farewell to ‘German dialogue’- large scale sonata design - and one of the last works he ever saw in print, dedicated to his friend and cellist Auguste Franchomme can be considered a great achievement. For Chopin, composing this sonata was a difficult process. ‘I do everything in my power to work – but somehow it just doesn’t come to me…’, he wrote Franchomme. We feel much joy every time we perform this sonata and feel privileged to have had the opportunity to record it with our fullest dedication. We therefore foster the hope that StarkLinnemann’s transformation of his marvelous Cello Sonata would put a smile on Chopin’s face were he able to hear it. Paul Stark 2016

All About Jazz musician pages are maintained by musicians, publicists and trusted members like you. Interested? Tell us why you would like to improve the Transcending Chopin Volume 2 & 3 musician page.