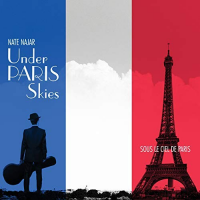 Jazz guitarist Nate Najar follows up the critically-acclaimed 2016 release of This is Nate Najar (Candid Records) with a heart-warming tribute to the city of Paris with Under Paris Skies, conveying his love of the city of lights with a charming and elegant set of love songs and ballads, all designed to set the mood and pull on your heart strings. Providing new treatments to a select number of Pop, jazz and classical-styled songs, Najar delivers a different message with this album, musically stating that this world metropolis, that has in the past featured and nurtured so many jazz greats, can also serve to nurture one’s soul.

Performing with a core trio that features {{Tommy Cecil}} on bass and {{Matthew Home}} on the drums, the leader, on the unamplified acoustic guitar, augments the format to a quartet on “Nauges,” and “Sa Jeunesse” with vibraphonist {{Chuck Redd}}. The music begins lightly on the leader’s delicate interpretation of pop singer France Gall’s song “La Mort Douce” followed up by {{Michel Legrand}}’s renowned standard “I Will Wait for You” taken from the 1964 film Umbrellas of Cherbourg. This tune highlights Najar’s handy finger work and bassist Cecil’s accompanying bass lines which is replicated throughout the session.

Paying homage to {{Django Reinhardt}}, the guitarist tees off on one of Reinhardt’s most familiar standards embellished and emboldened by Redd’s vibes. “Nauges,” comes across fresh and vibrant. The title track (“Sous le Ciel de Paris”), taken from the 1951 film of the same name and penned by Hubert Giraud, is perhaps the warmest ballad of the set.

The guitarist and bassist provide a delicious duet on “Apres un Reve,” while the familiar break-up tune from {{Charles Trenet}} “I Wish You Love,” has a faster tempo than normal but still turns the beautiful melody into a wonderful read of the classic. The tender music ends on “Chanson du Coer Brise” (Song of Songs) and the ever French “La Marseillaise.”

Nate Najar’s Under Paris Skies is truly one of the most beautiful light jazz albums recorded perfectly primed for the lover in all of us, well done!

All About Jazz musician pages are maintained by musicians, publicists and trusted members like you. Interested? Tell us why you would like to improve the Under Paris Skies musician page.