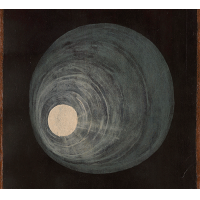 Billy Wilder said it best: “Don’t be boring”. While nearing its 20th birthday, Flat Earth Society is still sailing the seas of unease. Since 1999, Peter Vermeersch’ band has walked along several axes with the demented defiance of a tightrope walker. The band consists of fifteen voices, each of them filled with personality in its own right, yet retains the vision and focus of a hardcore collective madness. They’re also steeped in many traditions – Ellingtonia, daily routine, Zappa, big city frenzy, absurdism… – yet succeed in turning them all upside down and inside out. And finally, there’s that unrelenting tension between the disjointed, the provocative, the surreal (even short story master T.C. Boyle couldn’t think of these song titles!), and the authentic, the heartfelt and the committed. It shouldn’t surprise anyone that the album’s title track commemorates the victims of the terrorist attack on the Maelbeek metro station in 2016. Playing the two-headed Untitled #0 front to back, you’re once again struck by how much FES’ music has in common with the art of cinema. Not only because its language references several generations of soundtracks, but because the band, like an expert movie director, are experts at telling a story and use every single device at their disposal to excite, fool and surprise the audience. Like its predecessors, Untitled #0 is filled to the brim with a striking range of images, from the sassy clickety-clack of high heels over a sun-drenched Riviera strip (“Ape, Spies & Apps”) to the tightly controlled Marx Brothers-chaos that pops up with well-timed frequency; the pumping, high-octane ride of “La Malle-Valise de l’Heimatlos du Sleeping” (a title only Vermeersch could come up with), the raucousness of album closer “A. Maximum”, and the brooding moments of cocktail jazz interspersed with tales of seedy misconduct. Vermeersch contributed fourteen compositions and pianist Peter Vanderberghe four, one of them an arrangement of Gershwin’s “Summertime”. If the elasticity of the evergreen wasn’t already tested to its limits, FES completely ravages it, to finally present it in an aviary with a taxidermist’s eye for detail and realism. And we didn’t even mention a visit from Tommy Cooper, a meditation on Polish tripe soup and a rumor about the only woman in the band hypnotizing a gorilla. With Untitled #0, Flat Earth Society once again succeeds in building a compendium of hidden traps, treacherous swindle and musical debauchery. It’s right there in front of you, dangling its resources with a wicked grin. Of course, it might all be a trick of the eye as well, another instance of getting fooled by a devious, unreliable storyteller. And perhaps it will even remind you of the late great Misha Mengelberg’s creed: “Music doesn’t exist; at most it’s an illusion”. Words to live by. Compositions by Peter Vermeersch and Peter Vandenberghe, recorded by Raf De Clercq at the VRT Toots Studio in 2017. Mixing and mastering by Oz Fritz (known for his work with Tom Waits, Bill Laswell, John Zorn, Herbie Hancock, Ornette Coleman, Iggy Pop, Bob Marley and many others).

All About Jazz musician pages are maintained by musicians, publicists and trusted members like you. Interested? Tell us why you would like to improve the Untitled #0 musician page.