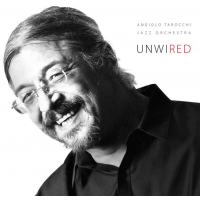 It started with the desire to score up some of Angiolo’s own compositions and charts with a large jazz ensemble, including excerpts from the previous productions. Particularly from the Jazz Chromatic Ensemble, a medium sized jazz ensemble, founded by himself and Daniele Cavallanti, which has featured many of outstanding musicians present today in the Italian jazz scene. And also foreign musicians, the pop-legend Robbie Robertson among others. Even though the language and the format of the present Angiolo Tarocchi Jazz Orchestra (ATJO) reflect callbacks to tradition, the artistic intent of ATJO is to explore more contemporary expressions possible in a large jazz ensemble. This ambition is reflected in the choice of musicians, who are the best jazz, avant- garde, and rock professionals, who have been cherrypicked from the Milano music scene for this project specifically. The various themes reflect my musical feelings: modal atmosphere and open improvised spaces (Unwired), a more classical imprint to formal patterns (Blues To Blues, based on Daniele Cavallanti’s theme), love for the song form (Dark Eyes, inspired by a tormented and passionate melody of the Ossetian songwriter Ahser Dzhigkaev, to whom this track is dedicated). Finally the two Skydreams. I had already recorded number 5 with a medium sized ensemble years ago, but I have repurposed it here, because I feel a particular affinity to it. The track is preceded by a short souvenir of number 3, which contains themes further developed in number 5 and represents a bridge between my past experiences  and this new adventure.

Prize: Ragmala: A Garland Of Ragas by Adam Rudolph

Break Up With the Sound

Village of the Sun / Ted