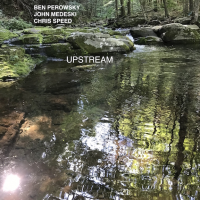 Sprung from out of the dark alleys and smoke filled venues of downtown NYC and Brooklyn, these 3 found themselves meeting regularly up in the Catskill mountains to breath some fresh air and knock some rust off their ever intertwined musical associations cemented more than 25 years ago. While all have been involved in pushing their music forward with self led bands, they have individually collaborated with a list of icons as long as the New York State thruway. Along with originals by Medeski and Perowsky, as well as paying homage and respects to heroes Wayne Shorter & Jaco Pastorius, this Woodstock NY made recording finally documents this musical triumvirate of Perowsky, Medeski and Speed. Jaco's composition Dania leads off the record. Medeski, brought in the handwritten chart by Jaco, with whom he played regularly while growing up in Florida. Perowsky also had brushes with the legend as a teen in NYC jazz clubs where he heard this composition performed many times. Meta is a portrait written by Medeski. Kanape written by Perowsky for a stream in the Catskills of the same name (near the one on the album cover). Paul was named for the great Paul Motian who passed a couple years prior to this recording. It also pays homage to Lennon's I Am The Walrus which bears slight reference to Paul McCartney. Worms originally recorded by MMW is written by Medeski. Face On The Barroom Floor is Perowsky's arrangement of Wayne Shorter’s composition from a duet with the late great Joe Zawinul. Wayne grew up in Newark N.J. with Bobby Thomas, Ben's main drum teacher. Sidecar is written by Miles Davis. Love and the Apocalypse is written by Perowsky in early 90's, not recorded until now. released November 19, 2019 Recorded by Pete Caigan in Woodstock NY on 5/13/14 Mixed by Danny Blume Mastered by Roger Lian Cover photo/design by Ben Perowsky Produced by Ben Perowsky

All About Jazz musician pages are maintained by musicians, publicists and trusted members like you. Interested? Tell us why you would like to improve the Upstream musician page.