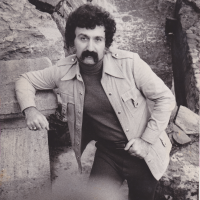 Mr. Mustafa Zadeh is an extraordinary pianist. It is impossible to identify his equal. He is the most lyrical pianist I have ever known.
—Willis Conover VOA Jazz Hour, Tallinn, 1967

Vagif Mustafa Zadeh - composer & pianist, legendary founder of Mugam-Jazz, is among those rare musicians who could compose and perform in any manner. Vagif attracts listeners by his originality, superb technique and harmonies all his own. Besides writing a number of his own jazz compositions and arrangements, Mustafa Zadeh composed Concert for Piano and Symphony Orchestra being a great success.

At the International Jazz Compositions Competition in Monaco 1978 Vagif Mustafa Zadeh won the 1 Prize for the piece “Waiting For Aziza.”

Vagif Mustafa Zadeh was the art director of jazz-trio “Kaukas”, “Leyli”, “Sevil”, “Mugam” jazz ensemble. He died o stage, just after he'd played his favorite piece, the Gerschwin tune “The Man I Love”. “Vagif Mustafa Zadeh was a great Genie, but I think he was born before his time. Vagif's music is from another planet... It's the Music from the Future.” Dizzy Gillespie, Washington, 1988.

“Vagif's music wonderfully modern... It's like a tale narrated by Sheherezadeh on the 1002 Night... “ Jan Johansson, Tallinn 1967.

“Vagif Mustafa Zadeh is one of the finest pianists in the world. “ David Becker, President of IAJE (International Association of Jazz Educators).

All About Jazz musician pages are maintained by musicians, publicists and trusted members like you. Interested? Tell us why you would like to improve the Vagif Mustafa Zadeh musician page.