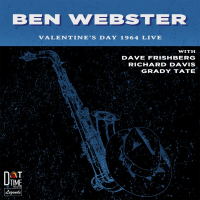 In 1963 Ben Webster moved to New York with a renewed energy. He was seen sitting in with Duke Ellington on opening night at Basin Street East and becoming the spontaneous pianist for Gerry Mulligan’s Concert Band at Birdland. He gigged at the Shalimar, Birdland and the Half Note with a quartet of revolving personnel. This recording captures just one such night. Ben’s sidemen, Dave Frishberg, Richard Davis and Grady Tate were more than twenty years his junior, but the language they shared was trans-generational. Webster spent the remaining nine years of his life living and playing in Europe. This is one of his last great performances in the USA.

All About Jazz musician pages are maintained by musicians, publicists and trusted members like you. Interested? Tell us why you would like to improve the Valentine’s Day 1964 Live musician page.