Vernel Fournier made his name as the deftly understated and highly musical drummer in one of the most famous of all modern jazz trios, led by pianist Ahmad Jamal. His subtle, quicksilver touches with his trademark wire brushes provided the flexible underpinning for a trio which thrived on its supple manipulation of dynamics and use of space.

He was born Vernel Anthony Fournier in New Orleans, and the distinctive rhythmic feel of the city never disappeared from his music. He began playing parade drum at the age of ten with a marching group, the Young Swingsters, and was taught by the New Orleans drummer Sidney Montague while still in school.

He attended Alabama State College in 1945-56, where he played with the student ensemble, and also worked in his home town with musicians from both the traditional and bebop strands of the city’s musical culture. He moved to Chicago in 1946, where he worked with the rhythm and blues band led by King Kolax.

He played with a number of Chicago based musicians, including Paul Bascomb and pianist Teddy Wilson. He was the house drummer at the Bee Hive club on Chicago’s South Side in 1953-55, where he accompanied many visiting soloists, including luminaries like Lester Young, Ben Webster, Sonny Stitt, J.J. Johnson and Stan Getz.

He joined Ahmad Jamal’s trio in 1957, along with bass player Israel Crosby, and remained with the group until 1962. The trio was resident at the Pershing Lounge in the city, and built a national reputation with a series of very successful recordings for the famous Chess label.

The best known of these records, “Live at the Pershing,” was released in 1958, and included their famous version of ‘Poinciana’. It became one of the best selling jazz records of all time, and remained on the Billboard jazz charts for over two years. Fournier’s sensitive and responsive contribution to the group’s distinctive ensemble sound was a crucial one. His subtle brush work, fluid fills and lithe swing were often understated, but always precisely to the point.

After leaving the Jamal trio, Fournier joined the band led by another leading pianist of the day, George Shearing, and remained with the London-born pianist for two years. He rejoined Ahmad Jamal for a time in 1965-66, and also worked with singer Nancy Wilson. He led his own trio in Chicago until 1979. He converted to Islam in 1975, and took the Muslim name of Amir Rushdan.

He moved to New York in 1980, where he remained much in demand. He worked with saxophonist Clifford Jordan, and played more occasionally with singers Billy Eckstine and Joe Williams, and with pianists John Lewis and Barry Harris. He led his own trio, and also developed a considerable reputation as a teacher of drumming, working at Barry Harris’s Jazz Cultural Theatre, the New School, and the Mannes College of Music.

He suffered a stroke in 1994 which left him confined to a wheelchair and unable to play drums, but he continued his teaching activities. He moved to Mississippi in 1998, where he died from a cerebral hemorrhage in 2000. 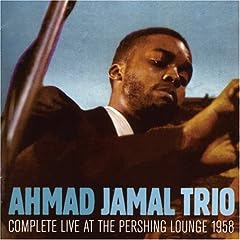 All About Jazz musician pages are maintained by musicians, publicists and trusted members like you. Interested? Tell us why you would like to improve the Vernel Fournier musician page.