Victor’s main performing projects are “Victor Haskins & Moving Sound Pictures” and “Victor Haskins’ Skein”. Moving Sound Pictures is an innovative, one-man-band where Victor extemporaneously improvises intricate, interactive soundscapes and spontaneous compositions. Elements of existing artistic traditions from around the world are evoked, repurposed, and filtered through his imagination. Additionally, Victor frequently collaborates with dancers in this setting, improvising collectively across mediums to orchestrate a powerful, cinematic experience. In Victor Haskins’ Skein, Victor is joined by a live bassist and drummer to explore the possibilities of collective improvisation through the forum of compositions and arrangements he has crafted for the ensemble, delighting and intriguing audiences with intense auditory interplay. Victor is known for his masterful use of the cornet, and unique integration of sound design triggered by electronic wind instrument (EWI) in both of these projects.

Some notable highlights from Mr. Haskins’ performance career thus far include the creation of his own improvisational concept—”Melodic Improvisation”—as well as an independently-conceived music genre that is based on that concept, called “ImproviStory” (which later evolved into his current project, “Moving Sound Pictures”). He released his debut album of all original compositions—“The Truth”—on 32 Bar Records in March of 2013, and will release his second album of original compositions—“Showing Up”—in February of 2019.

Victor has been featured at the Richmond Jazz Festival (2013-2015), Richmond’s 2nd Street Festival (2011, 2016), the Elkhart Jazz Festival (2014), the Apex Jazz Festival (2014), and the Festival of New Trumpet Music (2014). He has performed in venues such as the John F. Kennedy Center for the Performing Arts Millennium Stage (Washington, D.C.), the W.E. Singleton Center for the Performing Arts (Richmond, VA), Ewell Hall (Williamsburg, VA), the Jazz Gallery (NYC), iBeam (NYC), Résonance Café (Montreal, CA), Diese Onze (Montreal, CA), Snug Harbor (New Orleans, LA), the University of KwaZulu-Natal (Durban, South Africa), Teatro SESI Rio Vermelho (Salvador, Bahia, BR) and others. In addition, some of Victor's activities are supported by grants from the National Endowment of the Arts, and the Virginia Commission for the Arts.

As an educator, Victor currently serves as the Director of In-School Jazz Ensembles for the John F. Kennedy Center for the Performing Arts, Adjunct Professor of Jazz Trumpet at the College of William & Mary, and the Director of the Jazz Ensemble at the College of William & Mary. Previously, he served on the faculty of the inaugural Izmir International Jazz Camp (2012). Haskins has presented clinics and masterclasses on a variety of music-related topics at institutions including (but not limited to) the Jazz Education Network Conference, the University of Georgia, Virginia Commonwealth University, the Royal Academy of Music, Conservatoir Nadia et Lili Boulanger, the University of Richmond, TEDxVCU, and TEDxLizardCreek.

Victor holds a Jazz Studies/Performance degree from Virginia Commonwealth University where he completed the 4-year music program in only 3 years (the first and only person to ever accomplish this feat).

Victor is proud to be sponsored by Eclipse Trumpets, and Denis Wick mouthpieces.

Read more articles
“As trumpeter, Haskins possesses marvelous chops, great technical ability, savvy horn-sense and a flowing ease of execution that allows him to explore exciting, rhythmically unique improvised lines that hint of Woody Shaw. His trumpet sound is full, resonant and highly attractive across the range of horn (”Morning”). Haskins' improvised lines are filled with “flow-juice” and they spark rhythmic nuggets which he quickly and effectively develops.”

-Nicholas Mondello (All About Jazz)

“A third festival venue was introduced this year, with the MeadWestvaco Stage promising straight-ahead jazz acts

“As trumpeter, Haskins possesses marvelous chops, great technical ability, savvy horn-sense and a flowing ease of execution that allows him to explore exciting, rhythmically unique improvised lines that hint of Woody Shaw. His trumpet sound is full, resonant and highly attractive across the range of horn (”Morning”). Haskins' improvised lines are filled with “flow-juice” and they spark rhythmic nuggets which he quickly and effectively develops.”

-Nicholas Mondello (All About Jazz)

“A third festival venue was introduced this year, with the MeadWestvaco Stage promising straight-ahead jazz acts. Fitting that stage’s intent, Charlie Parker’s “Billie’s Bounce” opened the day, courtesy of the Victor Haskins Trio. It was a hot, impressive set where the trumpet of Haskins, a Virginia native, soared easily over the other sounds.”

“The Truth…could not have a more apt title. This is music: thoughtful, passionate, skillful, contemplative, life itself is contained within the set. Isn’t that what we would hope our music to be? The reflection of our lives?...In listening to The Truth…, I often found myself transported to a place where the only consideration at the time was the music and its emotive effect on my psyche.”

“Even at a tender age, trumpet player Victor Haskins has made a name for himself in the Richmond music scene while performing around the world.”

When I first listened to Mr. Haskins play, I was instantly reminded of the great rock guitar player Jimi Hendrix. You might wonder what the two musicians could have in common. Both musicians impressed me as being able to instantly move from mental creation to artistic technique. Both players, even though using different instruments and styles of music are/were able to perform whatever comes/came to mind without any technical difficulty…

When listening to most musicians, I hear the same licks and worn out patterns but in Mr. Haskins case, he seems to be free to reach down into his deepest areas to bring out new and refreshing ideas long overdue on our musical scene. Mr. Haskins seems to be fused mentally, as well as physically, with his instrument to produce pure musical creativity.

For a young artist on the rise, there's a remarkable stillness to Haskins. It's evident in the focused economy of his playing, perhaps even more so when he's simply standing, poised and listening, to someone else's solo.” 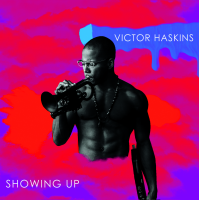 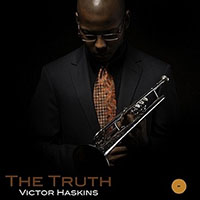 All About Jazz musician pages are maintained by musicians, publicists and trusted members like you. Interested? Tell us why you would like to improve the Victor Haskins musician page.