Victor Monsivais practice as a musician goes back for almost forty years playing Bossa Nova and Brazilian Samba classics, Jazz Standards, Latin Jazz and his own compositions in a variety of venues and ensembles including a couple of television shows. His repertoire draws from the greatest Brazilian composers and performers, such as Ary Barroso, Dorival Caymmi, Antonio Carlos Jobim, Newton Mendoça and João Gilberto, among others, performing their compositions in the original Portuguese versions. The same applies for the Latin pieces of his repertoire: Victor plays Beny More, Buenavista Social Club, Consuelo Velázquez, and all other Latin great ones in their original Spanish versions. And, when performing Jazz Standards, he again, renders the original takes. Victor plays an acoustic guitar with the true Bossa, Jazz and Latin beats. He also plays piano, harmonica and percussions. Monsivais was trained as an Architect, however, Music is his mistress: He not only believes that Architecture is frozen Music but also that Music is Architecture in fluid motion through time. 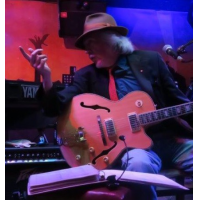 All About Jazz musician pages are maintained by musicians, publicists and trusted members like you. Interested? Tell us why you would like to improve the Victor Monsivais musician page.