The Swedish singer Viktoria Tolstoy was born in the small town of Sigtuna, near Stockholm, in 1974, but she has Russian blood in her veins. Her great-grandfather, the son of the world-famous writer Leo Tolstoy, grew up in Tsarist Russia. He suffered from a nervous illness, sought medical help from a famous Swedish specialist, fell in love with the specialist’s daughter, married her and settled in Sweden at the end of the 19th century. Since then the ancestors of Viktoria, the greatgreat-granddaughter of the legendary novelist, have lived in Sweden.

Viktoria’s childhood and adolescence were spent in Uppsala. Her father, a Swedish jazz musician, took his daughter’s musical education into his own hands, and introduced her to the world of jazz. In the mid 1990’s, while performing at a Stockholm club, she was discovered by a record company and offered a recording contract. Her debut album Smile, Love and Spice 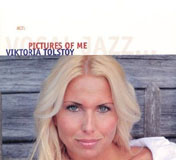 All About Jazz musician pages are maintained by musicians, publicists and trusted members like you. Interested? Tell us why you would like to improve the Viktoria Tolstoy musician page.