Vincent Houdijk is one of the most versatile music artists in The Netherlands with an average of between 100 and 150 concerts annually. The combination of his classical and jazz studies gave him an incredibly open and wide view on music which. always open for all kinds of music collaborations and styles Vincent Houdijk is without doubt a very open and even so spiritually minded music artist and teacher.

In 2007 vincent created his band VinnieVibes; an intense, dynamic and irresistible band which is highly appreciated by their fans and many music programmers. This year Vincent Houdijk & VinnieVibes performed at the world famous North Sea Jazz Festival and they recorded their third album there during this live performance.

Houdijk has worked with, among others:

In 2016, vibraphonist Vincent Houdijk was awarded the ‘Young VIP jazz award’ and was therefor declared ‘most promising jazz talent in the netherlands’. this award won him a nationwide tour performing at all the top dutch jazz venues such as the bimhuis in amsterdam, lantarenvenster in rotterdam and the paradox in tilburg. Houdijk has worked with, among others, Sean Jones, Eric Vloeimans, Remy van Kesteren, Wouter Hamel, the Residentie Orkest and Metropole Orkest. His band Vincent Houdijk & VinnieVibes is intense, dynamic and irresistible. This year, they performed at the world renowned North Sea Jazz festival and recorded their third album there. Bandleader Houdijk draws inspiration from everywhere – from pop to minimal music, and from jazz to world music. This allows him to create a personal, contemporary musical story, with a fine sense for harmony, melody and swing.

The other members of the band are: Floris van der Vlugt (saxophone), Gerson Raams (guitar), Sven Happel (bass), and Haye Jellema (drums), and they are all given plenty of space. Together they create a warm, deep and highly adventurous sound that entrances audiences, time and again.

Read more articles
”The concert of VinnieVibes was an energetic happening, expertly put down, with fresh ideas, great craftsmanship, attention to detail and for the leader himself: a huge sense of harmony, melody and swing. What should one need more to give an intriguing jazz concert? “

“The compositions of Vincent Houdijk emanate power and are vigorously brought to life. Each piece of music stimulates the imagination. “

Vincent Houdijk has lots of experience in teaching allover the world. Since he started teaching vibraphone and improvisation at the Conservatories of Amsterdam (CVA) and Rotterdam (CODARTS) Vincent Houdijk has created his own and unique teaching methods. Moreover he created his MALLETCLASSES.COM online video course platform for percussionists from allover the world. www.malletclasses.com www.percussionfriends.com www.vincenthoudijk.com

Vincent Houdijk has lots of experience in teaching allover the world. Since he started teaching vibraphone and improvisation at the Conservatories of Amsterdam (CVA) and Rotterdam (CODARTS) Vincent Houdijk has created his own and unique teaching methods. Moreover he created his MALLETCLASSES.COM online video course platform for percussionists from allover the world. www.malletclasses.com www.percussionfriends.com www.vincenthoudijk.com

Private Classes/Masterclasses/Lectures Vincent Houdijk has been giving masterclasses and lectures in many countries such as: Akademia of Music, Krakow (PLN) Haute Ecole de Musique, Lausanne (CHE) Conservatorio Superior, Lissabon (PRT) International Percussion and Bass Festival Portimaõ (PRT) Percucyl Percussion Festival (ESP) SommerStryk Summer Course (NO) ——- MalletClasses.Com was created and founded by Vincent Houdijk aiming to provide inspiring, targeted and effective classes for mallet players from allover the world. MalletClasses.Com features a Step-by-Step Video Course Series which helps to improve your skills on your instrument. Whether you are a classical marimbist or a jazz vibist, these videos will enhance and develop your musical vocabulary with long term results! With over 20 years of experience in the music business Vincent Houdijk created his own methods in which he is highly recommended and recognized by International Music Institutes. He gained his broad and widened view of Music after studying Classical Percussion (1999-2005) and Jazz Vibraphone (2005-2007) both resulting in graduating with great honor (cum laude). Vincent has gained years of experience while being trained by excellent artists and mentors such as Peter Prommel, Victor Oskam, Frits Landesbergen and the reputable Mike Mainieri. MalletClasses.Com is a platform where mallet players can easily access relevant tools, tips and video courses. www.malletclasses.com www.percussionfriends.com www.vincenthoudijk.com 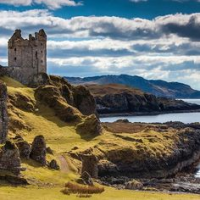 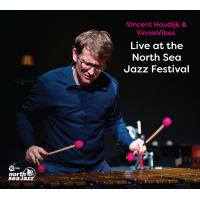 Live at the North Sea... 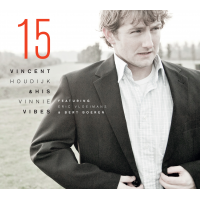 All About Jazz musician pages are maintained by musicians, publicists and trusted members like you. Interested? Tell us why you would like to improve the Vincent Houdijk musician page.