Visions Of A Peaceful Planet 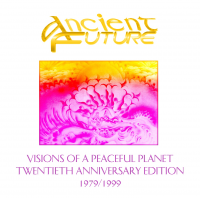 Visions of a Peaceful Planet by Ancient Future is the band's debut recording, recorded between December 1978 and May of 1979, when all of the members were studying at the Ali Akbar College of Music in San Rafael, California, under the late sarod master, Ustad Ali Akbar Khan. "By listing the instruments involved in this wonderful, worldly recording project one can imagine the aural possibilities – sitar, steel string guitar with scalloped fretboard, North Indian bamboo flute, tabla, cymbal, esraj, zither, flamenco guitar, Irish harp, tanpura, etc." "The first thing that makes this LP a delight is the magnificence of the instrumental blending. 'Zzaj,' by Montfort, for instance, sounds like music to celebrate the sunrise. 'Morning Song,' on the other hand, is based on Indian instruments, the Bansuri flute of Klein over a harmonic bed of sitar, tabla, sarod, zither, and tanpura; great stuff sounds like a dove whistling in a forest of stringed instruments." – Philip Elwood, San Francisco Examiner

Help improve the Visions Of A Peaceful Planet page

All About Jazz musician pages are maintained by musicians, publicists and trusted members like you. Interested? Tell us why you would like to improve the Visions Of A Peaceful Planet musician page.