In 2016, Walter led his Colorado quartet in a two-month residency at the Denver jazz club – Nocturne Jazz and Supper Club; performing his original music and arrangements. After completing this residency, he and his group, the Walter Gorra Quartet, dove into the studio to record Walter’s debut album “In Due Time” which was released August 1, 2018. “In Due Time” was nominated for the 17th annual Independent Music Awards (The IMAs) as “Best Jazz Instrumental Album” and in September of 2018 was selected as CD of the month by KUVO Jazz in Denver, CO. In Walter’s own words “music is a way to express oneself in a way that is often more powerful than words. Through my compositions and my playing I can describe people, places and experiences in the best way that I can. My debut album, ‘In Due Time,’ is really a snapshot of many of the events and people that have influenced me as a musician and as a person.”

In 2015, Walter was one of 30 young artists selected by KUVO during their 30th Anniversary year, as part of their “30 Under 30” campaign given them the spotlight and opportunity to have their audience become acquainted with them and their music. In February of 2015, Walter received a grant from the Boettcher Foundation to present and play with NEA Jazz Master Paquito D'Rivera in a master class and concert. The group, “The Walter Gorra Septet” played with Paquito D'Rivera at the KUVO radio studios in Denver, at the University of Colorado Boulder during a masterclass, and at the Mount Vernon Country Club in Denver.

Most recently, Walter was one of 15 Fellows invited to participate in the 2019 Ravinia's Steans Music Institute, Program for Jazz. All 15 fellows write original music in the program and they rehearse with a variety of individuals, learning how to perform well with changing personnel. He has been invited back for upcoming performances as part of a selection of 5 Alumni Fellows.

“From the first notes of this session to the final coda, the Walter Gorra Quartet will capture your ears and attention with their brilliant playing, imaginative compositions and superb swinging!! The experience these gentlemen have playing together produces some magical music moments. You can hear how they anticipate each other - they make seamless segues in tempos; from playing in unison to taking their solos.” _Arturo Gomez, Music Director, KUVO Jazz 89.3 Denver, CO 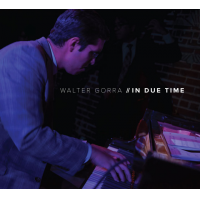 Walter Gorra
In Due Time

All About Jazz musician pages are maintained by musicians, publicists and trusted members like you. Interested? Tell us why you would like to improve the Walter Gorra musician page.