Wardell Gray was one of the truly great, yet by now almost obscure, bebop tenor saxophonists. With a smooth mellow and consistent tone, he created a tenor style that veered from swing to bebop, a style that was elegant, sure-footed, mature and distinctive. His premature death under mysterious circumstances in 1955, robbed the jazz world of another unique player, and cast him into distant recollection, though his talent deserves greater recognition.

Born in Oklahoma City, Gray grew up in Detroit, playing locally as a teenager. He was a member of the Earl Hines big band during 1943-1945 before moving to Los Angeles in 1945. This was a big break, as the Hines orchestra was not only nationally-known, but it had also acted recently as a nursery for some of the emerging bebop musicians, including Dizzy Gillespie and Charlie Parker. Although most of these had left by the time Wardell joined, playing with the Hines band was still a marvelously lively and stimulating experience for the young Wardell. He spent around three years with Hines, and matured rapidly during this time, becoming a featured soloist and demonstrating a relaxed, fluent stylist very much in the Lester Young mold.

Wardell left Hines late in 1946, settling in Los Angeles; soon after arriving there, he recorded the first session under his own name, “One for Prez.” This was a quartet session, and on it Wardell had strong support from Dodo Marmarosa on piano, bassist Red Callender and drummer Chuck Thompson. The date though having a lot of repetitive takes, produced some excellent sides, notably “Easy Swing.”

While in Los Angeles, Wardell worked in a number of bands, notably with Benny Carter and with the small group that supported Billy Eckstine on a tour of the West Coast. But the real focus in LA at this time was in the clubs along Central Avenue, here Wardell found his element, playing in the mainly after-hours sessions in clubs like Jack's Basket Room, the Down Beat, Lovejoy's and the Club Alabam, and his early success in these sessions led Ross Russell to include him in a studio session he was organizing for his Dial label. The session was designed as a showcase for Charlie Parker, but Wardell acquitted himself superbly, showing no sign at all of being over-awed by Parker's presence. It was in the Central Avenue clubs that Wardell held his famous tenor battles with Dexter Gordon. These two were ideally matched: Wardell's light sound and swift delivery was more than a match for Dexter's big, blustering sound, and their tenor jousts became a kind of symbol for the Central Avenue scene. Their fame began to spread, and Ross Russell managed to get them to simulate one of their battles on “The Chase,” which became Wardell's first nationally-known recording.

The success of “The Chase” was the break that Wardell needed, and he became increasingly prominent in public sessions in and around LA. Apart from a spell with a little band led by Al Killian (some Jubilee recordings by this group show Wardell in fine form) Wardell was still working mainly in one-off sessions during 1947. However, at a concert around the turn of that year which also featured Benny Goodman, Wardell so impressed the clarinetist that Goodman hired him for a small group which he was just setting up as part of his flirtation with bebop. Goodman had previously been highly critical of bop playing but, speaking of Wardell to Metronome, he said that “if he's bop, that's great. He's wonderful!”

Goodman's new group included pianist Teddy Wilson and it opened at the Click Club in Philadelphia in May 1948. Fortunately, enthusiasts recorded the nightly broadcasts from the club, some of the best of which have been released on CD, and they contain some superbly relaxed, fluent tenor work from Wardell. There is little sign of bop in the group's playing, the only noticeable influence being in some of Wardell's phrasing and in aspects of Mary Lou Williams' arrangements for the band.

The group was not, however, a financial success and Goodman eventually broke it up, but by now Wardell was fully established on the East Coast as an up and coming musician. For a while in late 1948/early 1949 he worked with the Count Basie Orchestra, whilst also managing to record with Tadd Dameron and, in excellent quartet and quintet sessions, with Al Haig. The quartet session included “Twisted” one of Wardell's best-known recordings and which was used as the basis for a best- selling vocalese version by Annie Ross.

Wardell left Basie in 1949 to return to Benny Goodman. However, life in the Goodman band became increasingly uncongenial for him. On leaving Goodman, Wardell rejoined Count Basie. Basie had bowed to economic pressures and broken up his big band, forming a septet which included Clark Terry and Buddy DeFranco; Wardell joined them in, probably, July 1950. This setting was a much happier one for him and the group enjoyed some success; airshots from the time show a very relaxed, swinging band with no weak links.

The only drawback to working with Basie (who had by now enlarged his group again to big band size) was the constant traveling, and Wardell eventually decided to leave so that he could enjoy more home life. The decision was entirely understandable, though the Basie rhythm section was ideally suited to Wardell's brand of swing.

At around this time his recording sessions started becoming fewer though a live session with Dexter Gordon, recreating the excitements of Central Avenue, and a studio session with Art Farmer have fine examples of Wardell's playing.

However, there are increasing signs of a lack of engagement in Wardell's work around 1951/52, notably in a further live session with Dexter Gordon from February 1952 and it seems that he may have been becoming disillusioned with the music business. That he was still capable of playing superbly is shown by his work on a live jam session at the Haig Club, but such sessions were by now very sparse, and more typical work from this period was recorded on a session with Teddy Charles.

He was still working regularly, though, and when Benny Carter was engaged in May 1955 to provide the band at the opening the Moulin Rouge, a new club in the black entertainment area of Las Vegas, he called on Wardell. He attended rehearsals but, when the club opened on 25 May, Wardell was unaccountably absent. Then the next day his body was found, with a broken neck, on a stretch of desert on the outskirts of Las Vegas. The police report stated that he died of an apparent drug overdose, no autopsy was allowed or performed, and the case hurriedly closed. The whole scenario if placed in the context of the period (1955) leaves a lot of room for doubt and confusion.

Proper Records has released the “Wardell Gray Story,” which is a four disc box set compiling his recordings from 1945 through 1952, including his legendary sessions with Dexter Gordon, “The Chase.”

The tenor’s Prestige recordings of 1949-52 have been reissued on “Wardell Gray Memorial vols. 1 and 2.” Included are a quartet date with pianist Al Haig, a sextet session with altoist Frank Morgan, lengthy jam-session versions of “Scrapple from the Apple” and “Move,” another quartet outing, and a sextet with trumpeter Art Farmer and pianist Hampton Hawes. Heard along the way are Gray’s famous solos on “Twisted,” “Jackie,” and “Farmer’s Market” plus many alternate takes demonstrating that he was a very creative tenor saxophonist, one who deserves to be remembered. 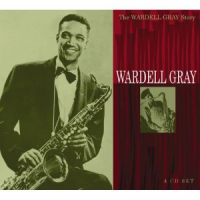 All About Jazz musician pages are maintained by musicians, publicists and trusted members like you. Interested? Tell us why you would like to improve the Wardell Gray musician page.