The versatile guitarist and composer from California, combines the best of jazz, blues, soul, and rock guitar with a post-bop approach to improvisation. The music he composes is an eclectic blend of styles and influences that often defies categorization. As an L.A. session guitarist, Wayne recorded and toured with artists such as Donna Summer, Debby Boone, Otis Stokes, Tata Vega, Rose Stone, and Andrae Crouch.

Performances around the world have included the JVC Jazz Festival in New York, the New Orleans Jazz Festival , the Playboy Jazz Festival at the Hollwood Bowl, as well as an appearance on Saturday Night Live.

Growing up in Northern California, Wayne began playing guitar at the age of 10. By the age of 13, he was playing professionally with local rock, jazz, and pop groups. When he was 17, Wayne traded blues choruses with Joe Pass on stage with a college jazz band. After studying jazz with Howard Roberts, Pat Martino, Don Mock, Ted Greene, Jimmy Wyble,Jamie Glaser and Charlie Shoemake and finishing a degree in classical guitar at California State University at Northridge in L.A., Wayne began a career as a session and touring guitarist for many top recording artists. He also fronted his own quartet which included bassist John Patitucci, drummer Art Rodriguez, saxophonist Brandon Fields with Judd Miller on E.W.I.

Wayne's association with Patitucci resulted in five recordings, including his album with drummer Peter Erskine, entitled “The Beatnik Walk”. The two latest recordings from Wayne are “Songs from the Icons”, a solo guitar album, and “PopArt”: a trio album with drummer Victor Jones and bassist Wayne Darling.

Since moving to Europe, Wayne has kept a busy schedule having taught at the American Institute of Music in Vienna, he was also guest professor of jazz guitar at the Hochschule fur Musik und Darstellende Kunst in Graz, Austria . Wayne is now an associate professor and heads up the jazz guitar dept. at the University of Stavanger in Stavanger, Norway.He also conducts clinics in and around Europe and tours with his own groups in Europe and the U.S. Show less

Guitarist/Composer Wayne Brasel Releases New CD Titled "If You Would...

Wayne Brasel Quartet - If You Would Dance (Universitetet Stavanger) 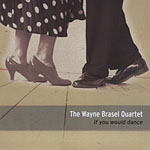 If You Would Dance

All About Jazz musician pages are maintained by musicians, publicists and trusted members like you. Interested? Tell us why you would like to improve the Wayne Brasel musician page.