Her interest in jazz led to venues in New York including a four year engagement as lead vocalist/flutist with the Rainbow Room Big Band, while continuing to perform with Latin/Jazz ensemble Southern Exposure. Performances include appearances at Windows on the World, The Waldorf Astoria, The Knitting Factory, Roulette, the Kitchen, Cornelia Street Cafe and many other clubs in Manhattan. Performances also include the Tropicana, Resorts International, and Caesar’s in Atlantic City as the opening act for David Brenner, Dr. Ruth, and Julio Iglesis, and others.

She has had experience working and recording with jazz/avant garde greats that include Don Cherry, Ornette Coleman, Oliver Lake, Marion Brown, Ed Blackwell, Dave Holland, Karl Berger, Wallace Roney, Anthony Braxton, Bob Moses, Jack DeJohnette, Sam Rivers, Tyrone Brown and Joe Lovano. A series of concerts featuring her music with Allen Ginsberg reading his poetry, took place at Naropa Institute in Boulder, Colorado. Wendy Luck has appeared in theater, and on television and radio. She has also performed regularly at New York’s comedy clubs, The Improv, Catch a Rising Star, The Comic Strip, and Dangerfield’s, combining music and comedy. As an eight year member of the zany, all female, musical comedy group The Outcasts, she performed the NYC comedy club circuit on a regular basis.

As an internationally recognized flutist, vocalist, and composer, Wendy has concertized in Italy, Poland, Germany, Budapest, Morocco, Portugal, Greece, Egypt, Israel. Performing with the 20th/21st Century New York Composers Ensemble led by Dinu Ghezzo, the group has premiered many original works including Songs of Sorrow/Songs of Hope, dedicated to the events of 9/11. Ms. Luck has also worked with the New Music groups Mad Coyote, created by Jerome Kitzke, Carmen Moore’s Sky Music Ensemble, as well as participating as co-creator with Jerome Kitzke of the improvisation duo Breath and Bone.

Ms. Luck has released two CDs of her own original music: The Ancient Key, recorded inside the Great Pyramid, and The Ancient Journey, recorded in the temples along the Nile. In performance, she utilizes the uniquely edited video footage taken during her experience in Egypt. This unusual performance piece integrates her playing live with the footage, creating a multidimensional musical experience. She has most recently been asked by the Egyptian Embassy to become a “Music Ambassador of Peace”, performing her music at the National Press Club in Washington, DC. Show less 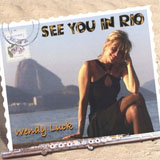 See You in Rio All About Jazz musician pages are maintained by musicians, publicists and trusted members like you. Interested? Tell us why you would like to improve the Wendy Luck musician page.