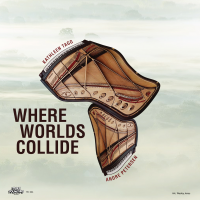 In this unique two-piano album featuring two of South Africa's leading pianists (Kathleen Tagg and Andre Petersen), original compositions live alongside music by some of the giants of South African jazz. This project is Pan-African in influence, though very much rooted in a South Africa. Kathleen Tagg and Andre Petersen met in 1996 as students at the University of Cape Town, and this recording marks the twenty year anniversary of their meeting. In the intervening years, Kathleen moved to New York City, and Andre studied further in Belgium. Along the way, each of them worked with a wide array of musicians in multiple genres who influenced their paths and thinking. For this recording, every one of those influences comes into play- classical training and structure, jazz improvisation, polyrhythmic influences, extended techniques, goema and the sound of selected sub-Saharan African instruments. Each pianist is also a composer, and this recording uses as its cornerstones Kathleen and Andre’s original compositions. They are placed alongside music by some of the giants of South African jazz. This is a project that is Pan-African in vision, but chamber music in scale. The pianos are used in traditional and non-traditional ways to achieve a wealth of sounds from the inside the piano by using organic extended techniques such as plucking, stopping the strings and bowed piano.

All About Jazz musician pages are maintained by musicians, publicists and trusted members like you. Interested? Tell us why you would like to improve the Where Worlds Collide musician page.