A self professed gypsy in heart and soul, singer actor Wren Marie Harrington identifies herself with everyone and no one. Once a diehard opera soprano touring Europe and America, she took a detour through musical theatre, notably Broadway, in Andrew Lloyd Webber's “Phantom of the Opera”, where as an understudy for the tempestuous diva Carlotta, she rescued many an ailing headlining soprano. The chameleon is currently busy exploring a treasure trove of global music idioms and celebrates her newest home with a debut recording Light Travels.

Wren was born in Atlanta, Georgia and raised in Louisville, Kentucky. Starting –as so many did—as a teenager in a church choir, she studied opera in college followed by postgraduate opera training in Germany, Italy and Austria. She has a Bachelor of Voice Performance degree from the University of Iowa and studied at the L’Accademia Vocale di Lucca in Italy, and the American Institute of Musical Studies in Austria. She toured as a concert soloist and leading soprano throughout the US and Europe and a short list of her credits include roles in La Boheme, Carmen, Hansel and Gretel, Der Rosenkavalier, Turandot, A Chekhov Trilogy (NY premiere), Don Pasquale and The Face on the Barroom Floor. Operetta and musical theater credits include The Merry Widow, Bittersweet, Kiss Me Kate, Showboat, The Fantastiks, No No, Nanette, and Man of La Mancha. Several years after establishing herself in New York City, Wren landed a role in the longest running show on Broadway (Phantom of the Opera). Here she roosted for a decade, before deciding to branch out into the musical sounds that drifted past her window from the busy street below. Cuban, Mexican and Brazilian melodies haunted her and she developed a style of singing that fused her smooth elegant vocal phrasing with the infectious rhythms of Latin jazz. She soon became a frequent invited guest artist of Mexican and Italian music festivals and recorded with jazz pianist and composer Toto Torquati. Further engagements with other New York City Latin music artists led her to a musical partnership with jazz pianist/arranger Art Bailey, with whom she has developed an exotic blend of musical traditions, free of borders.

Light Travels is an exploration of popular Latin American, Brazilian, Italian and American classics from the 1930’ to the 50’s. Twelve songs are infused with jazz and the subtle blending of diverse global musical elements. The result is a vibrant and complex collection of musical gems, unconfined by idiom or country. Light Travels marks Ms. Harrington’s first solo album and is a culmination of the many musical forces that have shaped her career. Her multilingualism lends itself to this collection of international standards, and she renders each song in its original language. She is joined by co- producer/arranger/jazz pianist Art Bailey, a rising force on the improvised and world music scene. Mr. Bailey has skillfully fused a variety of musical genres into a well-woven tapestry and is joined by a seasoned group of notable New York-based jazz/world musicians and guest artists from New York City’s thriving global music scene. Show less

An Interview With Wren Marie Harrington

”Wren Marie Harrington's “Light Travels” has extravagant variety not limited in styles or even languages. The album is simultaneously soothing and tickling.” - Jazz Corner

“...a marvelous voice, an artist who is destined to make history in the concert world.” Centro Uno, Naples, Italy 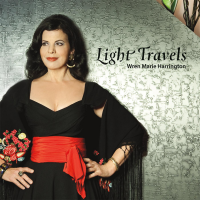 All About Jazz musician pages are maintained by musicians, publicists and trusted members like you. Interested? Tell us why you would like to improve the Wren Marie Harrington musician page.