In 1977, Robben Ford assembled a group of veteran session musicians to record his album The Inside Story. The trio of musicians, which included keyboardist Russell Ferrante, bassist Jimmy Haslip and drummer Ricky Lawson, soon discovered a certain “chemistry” and musical affinity that led to their formation of Yellowjackets. The Inside Story being mainly instrumental, Robben Ford's record label wanted him to record another album that was more pop and vocal oriented. The group, known as the Robben Ford Group, preferred to pursue the instrumental route, and a “band within a band” was formed. This same group with Robben Ford on guitar recorded digital demos that were eventually accepted by Warner Brothers, and Yellowjackets was born. While Robben's contributions would diminish over the years to being a guest artist, the group known as Yellowjackets would flourish.

Their debut album Yellowjackets made serious waves in jazz radio, garnering public and critical acclaim. Mirage A Trois followed in its footsteps. While they went on a brief hiatus to pursue other projects, they reassembled in time for the 1984 Playboy Jazz Festival, adding percussionist Paulinho Da Costa and their new lead voice, sax man Marc Russo. This landmark concert paved the way for their eventual success both on the Billboard Jazz charts and concert venues around the world, and resulted in the third spicy Yellowjackets album Samurai Samba. 1986 saw the group moving over to MCA Records to record Shades, the title track being written by Donald Fagen (of Steely Dan fame) as a tribute to the many “shades” he heard in the group's music.

With their album Four Corners, Ricky Lawson departed to join Lionel Richie's touring band and was replaced by the versatile William Kennedy. This rock-solid lineup took the Yellowjackets into new territory, exploring world beats and densely-populated soundscapes that reflected a growing maturity in their music. CloudjacketsPolitics, the follow-up to Four Corners, mellows out, and the group sheds some of the electronic elements and starts exploring acoustic sounds. Marc Russo's final recording with Yellowjackets, The Spin, was recorded in Oslo, Norway by noted engineer Jan Erik Kongshaug (well known for his work on the ECM label), and the Jackets proved that they could belt out acoustic jazz with the best!

Greenhouse ushered in a new era. With Marc gone, the Yellowjackets trio would record one of their most adventurous albums to date, featuring ace big band arranger and saxophonist Bob Mintzer on many of the tracks, and string accompaniments on a handful of others. Shortly thereafter, Bob Mintzer became a bona fide member of Yellowjackets. The Jackets also recorded on one of Bob Mintzer's dmp Records projects, One Music. Live Wires captures the group in concert with Mintzer at the helm. The two albums that followed, Like A River and Run For Your Life, reflected a growing interest in straight-ahead acoustic jazz.

With 1995's Dreamland, Yellowjackets returned to their first record label, Warner Brothers, producing their most relaxed, and relaxing, recording to date. Blue Hats is more spontaneous than its predecessors, musically rich and particularly revealing in showing how Yellowjackets have evolved since that landmark first album. Club Nocturne, their latest studio recording, achieves great crossover appeal with the guest vocalists Kurt Elling, Jonathan Butler and Brenda Russell. And while the Yellowjackets of today sound little like the original Yellowjackets from fifteen-plus years ago at first listen, the unmistakable talents of the individuals involved still have the unique signatures that shine through regardless of their musical setting, whether it be blistering-hot fusion or full-blown acoustic jazz. In other words, their music has evolved and matured considerably, but there's no mistaking that it is Yellowjackets you are hearing.

At the beginning of 1999, William Kennedy departed Yellowjackets to pursue other interests, and Peter Erskine joined the group for the balance of the year. Peter had played with Bob Mintzer on some of his big-band and small group recordings, so it was a natural that he would become one of the Yellowjackets. Unfortunately, Erskine's busy schedule would conflict with the band's, and he would depart by year's end without ever having recorded an album with the group.

In early 2000, the Yellowjackets were once again a trio, with Russell, Jimmy and Bob using different drummers as they continue touring throughout the year. Two of the fine drummers they've hooked up with were Marcus Baylor and Terri Lynn Carrington. For 2000, the band also saw a change in management, and Jimmy's long-awaited (and long-delayed) solo recording, Red Heat, was released later in the summer.

In 2001, the band self-released the pivotal live “Mint Jam” recording, with Marcus Baylor now essentially the band's full-time drummer. Since that time, the Jackets signed a deal with the HeadsUp International label, and have since released “Time Squared”, the holiday release “Peace Round” and, most recently, “Altered State”.

What's In A Name? If you're expecting something cute or meaningful in the naming of the group, you may be disappointed. Russell Ferrante relates the following on how the group's name was chosen: “I wish there was a clever rationale, but there really isn't. At the time we were making our demo in hopes of landing a recording contract, we were still the “Robben Ford Band”. We had recorded one record with Robben, (primarily instrumental) but his record company was “encouraging” him do do something more pop and vocal oriented. As we also wanted to continue playing instrumental music, we all decided to form a “band within a band” so to speak. At the demo session Jimmy brought in a sheet full of possible names, most just awful. The one that popped out was Yellowjackets as it seemed to connotate something lively, energetic, and something with a “sting”. That's really about as deep as it went. Once you choose a name, you're stuck with it so here we are, 16 years later, grown men playing in a band named 'Yellowjackets.'” Show less

Yellowjackets Embark on New Chapter with Latest Project, "A Rise in the...

Yellowjackets Sign with Mack Avenue Records: Announced at the 2010... 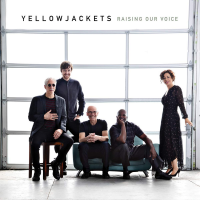 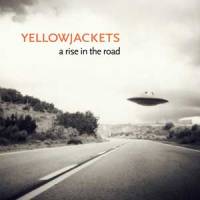 A Rise In The Road 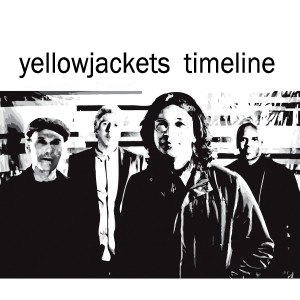 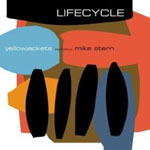 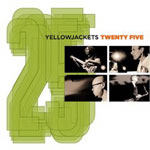 All About Jazz musician pages are maintained by musicians, publicists and trusted members like you. Interested? Tell us why you would like to improve the Yellowjackets musician page.