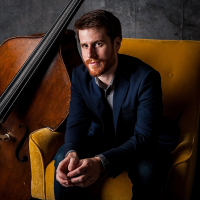 Bassist, composer, bandleader, and educator, Zac Carson has developed a modern playing style that draws from the jazz tradition, incorporating many influences from rock, classical, and folk. Currently based in Brooklyn, NY, Zac is known for his lyrical playing, innovative compositions, and intricate grooves.

Zac's recent album Something from Before includes original compositions that were written and recorded a month before the Covid-19 pandemic. The album features talented New York jazz musicians who each showcase their own voice and style through the music.

Performance highlights include performing alongside Chris Brubeck, Randy Brecker, the band Evanescence, and the premier of Harry Connick Jr.’s musical, Happy Elf. As a classical bassist, Zac has steadily performed with the Flagstaff Symphony, West Valley Symphony, and the San Juan Symphony.

Zac’s debut album, Between Two Worlds, is performed by an all-star band and showcases Zac as a composer. The compositions surpass standard jazz forms, creating a dramatic, exciting, and powerful listening experience. Through its expressive motifs, Between Two Worlds is a thematic cohesiveness representing the polarization of two opposing realities.

////bc
ALL VIDEOS
Zac Carson · Something From Before

All About Jazz musician pages are maintained by musicians, publicists and trusted members like you. Interested? Tell us why you would like to improve the Zac Carson musician page.