A multi-talented performer, Zac plays saxophones, flute, clarinet, shakuhachi, EWI (Electronic Wind Instrument), and a host of ethnic flutes. In 2019 he released his debut album, Fulfillment, which includes twelve original tracks for jazz quartet combining jazz fusion and Japanese traditional music. He has recorded woodwinds for the soundtracks of Final Fantasy XV: Assassin's Festival, Just Cause 4, Street Fighter V, RWBY, Lazer Team, Moonlight Blade OL, and many more. He has also had the pleasure of performing in twelve countries with the likes of Anat Cohen, Kirill Gerstein, Mario Frangoulis, Nobuo Uematsu, and Wataru Hokoyama. In 2017 and with a grant from the Asian Cultural Council, he conducted a five-month residency in Tokyo, Japan where he studied the shakuhachi and its traditional music under masters Kinya Sogawa, Keisuke Zenyoji, and Akihito Obama. He was invited to speak at the 2018 World Shakuhachi Festival in London, UK on the usage of the shakuhachi in the jazz medium. Currently, Zac lives in New York City, writing for and performing with his progressive jazz quartet, the Zac Zinger Group, and his Japanese traditional/jazz fusion duet, KAI.

Zac is also an award-winning composer, arranger, and orchestrator with years of experience in a wide variety of mediums. He has written for film, commercials and video games, including compositions for Street Fighter V, Jump Force, Mobile Suit Gundam: Side Stories, jazz arrangements of CAPCOM's Monster Hunter and Okami series, and big band arrangements for Rooster Teeth's animated series, RWBY, which reached #1 on the iTunes charts in May 2016

. Awards he has received include a 2016 Asian Cultural Council Artist Fellowship; the 2012, 2013, 2014, and 2015 ASCAP Young Jazz Composer Awards; the 2013 ASCAP Johnny Mandel Prize; the 2009 and 2010 Herb Pomeroy Jazz Composition Awards; and the 2007 Pittsburgh Jazz Society Leadership Award. Zac has also been a featured speaker and guest lecturer on game music at Game Sound Con, Game-a-con, Play NYC, Captivate Convention, Five Towns College, and Playcrafting at Microsoft. He is also the Music Supervisor for New York’s Bit Awards and 24-Hour Musicals. In 2011, he graduated Summa Cum Laude from Berklee College of Music with degrees in Jazz Composition and Film Scoring. Show less

Zac Zinger Saxophone Shakuhachi New York City Japan EWI jazz fusion quartet Japanese traditional contemporary saxophone, alto
”Zinger proves that there are no limits to what can be played on the shakuhachi.” 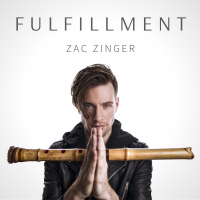 All About Jazz musician pages are maintained by musicians, publicists and trusted members like you. Interested? Tell us why you would like to improve the Zac Zinger musician page.